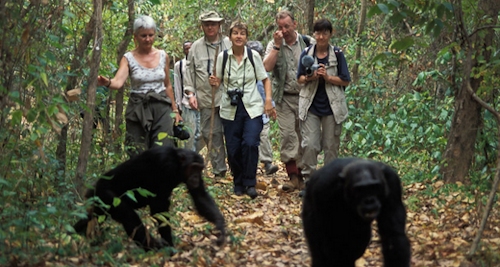 The Gishwati-Mukura is Rwanda’s newest National Park, according to the conservationists who have worked really hard to see that they protect this stretch of the Congo Nile divide, this is a great success. As you plan your Safari in Rwanda, don’t forget to include it on your itinerary because it a great place to do some primate watching including Chimpanzees

The History of Gishwati-Mukuru National Park

Back in 2015 the government of Rwanda passed a law to establish a new national game park that combines the Mukura forest together with the Gishwati forest, so as to form the Gishwati-Mukura Rwanda National Park – an area covered with forests that will northwards close of the renowned Volcanoes National Park – the home of mountain gorillas, and then southwards to the forests of Nyungwe covering Gishwati as well as Mukura forests

Previously, Gishwati Forest was part of a bigger rain forest system that spread out through the central part of Africa, connecting the Congo rain-forests to the Nyungwe Forest. It was quite a flourishing and richly bio-diversified area offering a great wildlife habitat.

How people Encroached the Gishwati-Mukura Forests

When the fright of the 1994 genocide subsided, several Rwandan people rushed to the Gishwati and Mukuru Forests and resettled there building homes and establishing communities. Consequently most of the trees in this region where cut down to create land for settlement and farming. As time went by, agriculture as well as cattle ranching severely degraded this area to the extent that it was affected by landslides, soil erosion as well as landslides.

Trees were chopped down and natural resources were extracted, which in the long run shrunk the forested areas, straining them beyond their own means thus endangering the survival of the resident primates.

In a bid to ensure that the Forests were not completely destroyed, the government of Rwanda started the Gishwati Area Conservation Program with a future goal of forming a National Wildlife Conservation park, not only to safe guard the at the time thinning forest but also to protect and restore the resident population of chimpanzees.

The Formation of Gishwati-Mukuru Park

The fast deteriorating forest cover caused conservationists to make a lot of ‘noise’ in relation to protecting Mother Nature, and fortunately in September 2015; the Rwandan government passed a law that offered joint national-park status to the forests of Gishwati and Mukura Forests, forming today’s Gishwati-Mukura National Park.

Other than safeguarding these established areas of each of these forests, they established a buffer-zone of trees with an enduring plan to restore a wildlife corridor. The newly created National Park will provide a safe wildlife corridor connecting Gishwati and Mukura Forests to the renowned Nyungwe Forest enabling free movement of the resident primates.

This with no doubt is a big step in Rwanda’s conservation of its national treasure and this guarantees an excellent habitat.

This being mainly a forested national park, the primary wildlife living here are primates. Chimpanzees are the key attraction in this park that bring tourists from far and near. It is anticipated that with the ongoing conservation efforts within Gishwati-Mukura National Park the population of Chimpanzees is going to increase across East Africa.

Other primates living within the Park include: Black & White Colobus monkeys, Golden Monkeys, L’Hoest’s Monkeys as well as Blue Monkeys.

The formation of Gishwati-Mukura National Park is very exciting news to the Rwandan tourism sector and we are confident this is going to further boost this sector and increase the number of people that will be visiting this beautiful country. So while planning your Safari in Rwanda, don’t forget to include it on your itinerary.