Where Can I See the Tree Climbing Lions within Uganda?

Where Can I See the Tree Climbing Lions within Uganda? 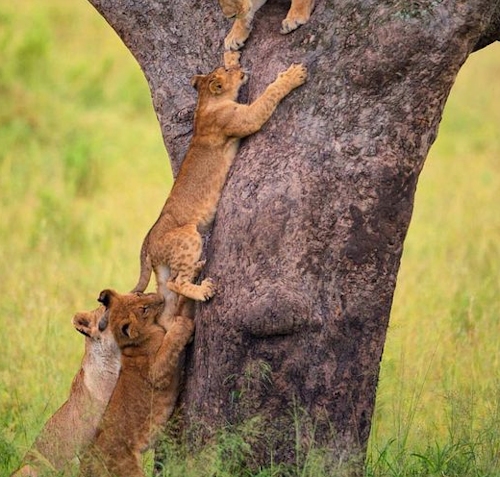 There are only two populations of tree – climbing lions in the whole world and fortunately Uganda prides in holding one of these! The Ishasha region in Queen Elizabeth National Park is habitat to the internationally famed tree climbing lions found in Uganda which can be seen during our Safaris to see tree climbing lions. The other population though not very popular is found in Tanzania.

Where is the Ishasha Area found?

The majority of people that take safari to Uganda do not choose to see these unique lions assuming that the activity is very tasking; however the good news is that these lions are not very hard to see as compared to cheetahs and leopards. Uganda is among the finest safari destinations on the African continent where you will easily see lions. Dissimilar to other felines, lions are somewhat social and live in large prides of close to 15 members among which are the males, females plus their cubs (young ones).

Internationally, there are just 2 populations of tree climbing lions and fortunately Uganda prides in holding one of these. Within Uganda, these tree climbing lions can be seen within the Ishasha region, found in the southern section of Queen Elizabeth National Park. There are close to three lion prides living in this region although their exact population remains unclear but is however estimated to forty members. Taking a game drive in the Ishasha region of Queen Elizabeth National Park will reward you with a life time memorable experience of encountering these Lions resting on the tree branches as well as sights of other animals.

Why do these Lions climb trees?

Although the cubs normally climb these trees particularly for fun, the adult lions don’t do I for fun. It is supposed that they climb trees so as to escape from tsetse flies (which are big flies with a nasty bite), and also climb these trees to escape the heat on the ground and enjoy the cool breeze up in the fig trees. One additional special thing about the Ishasha lions is that the manes of all the male lions are black.

Is it easy to see these lions?

Even though these tree climbing lions are hard to see, daily sights of these animals have been recorded by the management as well as staff of Queen Elizabeth National Park, and for that reason they are well skilled in tracking the whereabouts of these lions in the parks. The fig trees climbed by these lions, line the different roads within the Ishasha region of the park, offering visitors an opportunity to clearly marvel at the lions while in the comfort of your safari vehicle. This in addition offers clear opportunities for photography.

What else can I do besides watching the Tree climbing lions?

Embark on half day or full day game drives as you explore Queen Elizabeth National Park, during which in additional to the tree climbing lions you will see hundreds of wild animals freely roaming in the park. Among these animals are zebras, bushbucks, African elephants, a diversity of antelope species, buffaloes, and warthogs.

There is a profusion of birds living within the areas surrounding the Ishasha region which you can always marvel at.